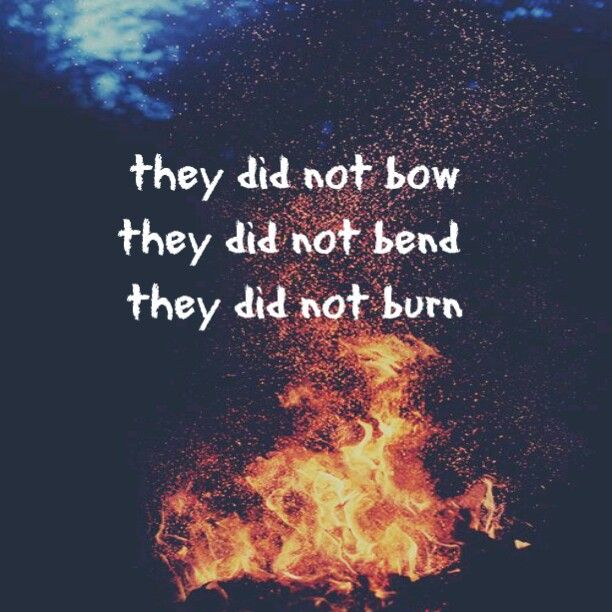 Daniel 3 Part 2. When the three friends did not compromise, they were thrown into the blazing furnace. However, strangely they were not burned, and even stranger was the appearance of a fourth person, handsome of Italian descent, together with the three friends having a good time in the fire and taking a selfie together. Humor aside, due to their absolute attitude, God intervened in a dramatic manner.

When I was a born again believer of about two or three years, one day my appendix ruptured. Usually when a person’s appendix is inflamed, it causes tremendous pain and they immediately undergo a surgery to remove it. In my case I didn’t know and didn’t care that my appendix had already ruptured since I was wrestling with a hard headed sheep through Genesis intensive. I still remember going to Bible study with a ruptured appendix, barely able to walk. I was in so much pain that I took tiny steps like a 95 year old person. Later I learned that a person has about 10 days to live after a ruptured appendix. Mine had ruptured for about 2 or 3 days. My sheep felt pity for me and did not want to keep studying the Bible until I had gone to the doctor.

To make a long story short, I drove to Harbor UCLA hospital with my mom. While I was waiting in the long E.R. line, I became dizzy and fainted. Much later, I knew something was really wrong when they gave me a chemical substance to drink that caused my body to be very warm to prepare me for a CT scan of my abdomen. While I was nervously waiting for the result and lying in great pain, a young doctor entered the room. She said my appendix had already ruptured. All kinds of gooey, toxic, and disgusting things had infiltrated my entire blood system, and she would operate on me immediately. She explained to me all the possible side effects and complications that might follow from the surgery. Then in the most casual manner, she told me that as with any surgery, there is the chance of death, and she wanted me to sign my name here, here, and here. That was when I became so scared. I was in extreme distress. I was in tears because there was a very real chance that something wrong might take place and I wasn’t going to wake up again.

Then when the nurse was pushing my hospital bed to the operation room, it was time to face the music. Lying there with teary eyes, half asleep, half awake, half dead, half alive, and being so overwhelmed by fear, for some reason I remembered back to the passage when Jacob was about to meet Esau and how he was so fearful. But God comforted him by allowing him to see the camp of angels. As I was thinking about that, suddenly I saw at the corner of the bed by my right foot the transparent silhouette of a person sitting with their back toward me. That person just sat there very still and quiet, like a soldier standing watch. Then when it hit me that I was seeing an angel, I tried to have a clearer view, but the image disappeared. To this day I still appreciate that person sitting there watching over me. Perhaps, in the future I will have a chance to meet that person. As for me, perhaps when I had reached my limit and had shown an absolute attitude toward God’s mission and taking care of sheep, God had mercy on me and sent an angel to comfort me. I will always remember that very peculiar event.

For their absolute attitude toward God, the three friends were promoted. Their absoluteness gave them total freedom to live or to die for God. The freedom to live or to die now propelled them to great success. At the present moment in Hong Kong there are huge ongoing protests concerning the extradition law that the executive chief wants to pass. The law would extradite back to mainland China anyone who speak out against the Chinese Communist Party. The law is the first step in taking away free speech and freedom in general.  The Hong Kong people will have none of that and they are fighting back to preserve their freedom. It is often written that once a person has breathed the air of freedom, they will fight anyone who tries to take that freedom away from them. I was surprised to learn that Hong Kong is one of the financial capitals of the world, on par with New York and London. Hong Kong is incredibly rich and prosperous.

Later that day as I was reading my book on a different topic, I read something that resonated with me. The author wrote something to the effect that where there is freedom, there is wealth and prosperity. Saigon, the capital of South Vietnam before the Communists took over, has and will always be richer and more prosperous than the capital in the north, because there is more freedom in the south. That also explains why Hong Kong is so rich and prosperous: because there is freedom. One article I read says that in Hong Kong, one out of every seven people is a millionaire due to high property value. That is about 14 percent of the population. American can also boast about having the same statistic: one out of seven Americans is free from debt. Humor aside, America is also rich and prosperous, since it is land of the free because of the brave.

Wherever there is freedom there is wealth and prosperity. Freedom is the second blessing God gave to Adam. The first blessing is His holy mission to fill the earth. As long as Adam enjoyed that freedom, his life was so good. I would even argue that Adam was the richest, most prosperous person in history, because the Garden of Eden was all his and on the ground were pure gold and other precious gemstones. He was so prosperous that when he married Eve, he did not need to give her gold or diamonds. Instead, he gave her a poem, which was really a piece of his heart, and he gave her one of his ribs. That was romantic.

One Word: Receiving what God holds in His right and left hand by being absolute.

"Every Good Gift comes from God"
The King continues, “How great are his signs, how ...
I Can Do All ThingsThrough Christ
Graduation Testimony Key Verse: Philippians 4:...
God's Work in Taiwan
This past Christmas, my husband Pedro and I ha...
Post Views: 1,187
Loading Likes...
Login
Please login to comment
5 Comments
oldest
newest most voted
Inline Feedbacks
View all comments
shepalexandra

I pray your humor will never subside!!! It really makes the whole church laugh when you have your funny style in your testimonies. Your story about the angel really helped me to see that God is with us even in those scary moments…just like it was scary for the three to go to the fiery furnace, it must’ve been scary for you in the hospital. Therefore, God was close beside you. I pray you grow stronger and stronger with every passing day and that your humor will grow funnier and funnier with every passing day. Aha. Thank you for sharing your testimony!

Aha! Here is the second half!

Can’t imagine how painful it was to have appendix ruptured, but the testimony was glorious and amazing. It makes me envious that you even had a guardian angel! 😀

When you described your experience about surgery and the chance of death I felt scared. But when you described God’s angel sitting nearby you I felt comforted. I can see God’s love, honor and concern for you. He showed that you were not alone but He was with you. He intentionally let you see His holy angel to comfort you. Wow God is amazing. Thanks for sharing.

Sign here , here and here. When you were describing the event and how serious it was I was getting goose bumps but when you described Gods presence I got chills. It’s true that when one shows absoluteness towards Gods mission, God does have mercy on that person and never leaves that person alone. You are extremely blessed by God and God has love and mercy for you. I have seen His hands of love and protection on you personally. I pray that in the far far far future, when you are old and gray and are ready to return home that you will meet that very one who has been standing watch over you. Thank you for your testimony. 😎

I still remember the time when all this happened. I was so amazed and encouraged and moved by your determination to do the work of God. Even now I am still very encourage by all ur testimony. I praise God for his work in your life. And I thank you for sharing such beautiful testimony. God is surely living and active.

It is great to have you as our fellowship leader 🙂