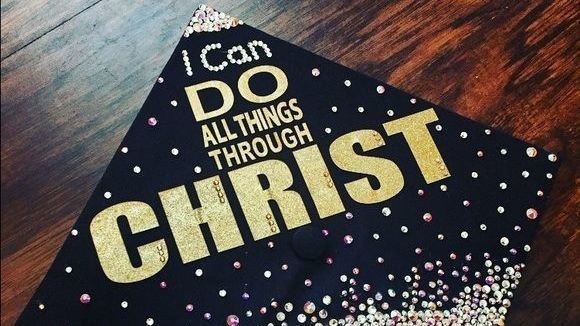 I Can Do All Things Through Christ Who Strengthens Me

My name is Eduardo. By God’s grace I am a recent graduate, with a bachelor’s degree in Graphic Design. My story begins with my childhood, as an elementary student I did very well in school. Every year I would get many awards, trophies, and certificates, but once I started middle school I was influenced by rebellious teenagers and began ditching class, vandalizing the walls, and smoking weed. I came to the point that I didn’t care about my grades anymore. As a result I didn’t graduate middle school. On the last day of school I got caught smoking weed on the playground. When my parents were informed, they were shocked and heartbroken, and I was afraid to go home due to the punishment I would receive.

In high school my life only got worse. I lived a very proud, criminal, and party lifestyle. I did many dangerous and crazy things for fame and acceptance. I got into lots of fights, got arrested various times, and made lots of enemies. Due to my sinful lifestyle I became a source of trouble and burden to my parents. One night I almost died as I was running away from the cops only to get hit by a van. As a result, I was bed ridden for two years and I was homeschooled from that time on. After that event my high-school friends abandoned me and my girlfriend forgot about me. It was during this time that I felt very lonely, bitter, and empty. I knew there had to be more to life then just existing. So I started searching up videos online about the meaning of life, but I still felt depressed and empty inside. Furthermore I did not graduate high school together with my high school class. When the time came for my high school class to graduate, I had many mixed emotions: anger, envy, and fatalism. I felt as if all my former classmates were successful, while I was a huge failure.

Later when I finished my high school education, my parents gave me two options, either find a job or go to college. I tried to enroll into college, but the process was so complicated to me that I just gave up. Later that year an art director from an enrichment program enrolled me into college and with government funds paid for my classes. My plan was to just take art classes so I can get better at art, all the while lying to my parents about being a full-time student.

That semester I was approached on campus and asked if I was interested in studying the bible. From the first bible study my eyes were opened to the truth that I had been searching for. Then when I attended my first bible conference God healed me from depression and emptiness through the parable of the lost sheep. I was very touched by God’s personal love for me in leaving the 99 in order to search for me, a lost and wandering sheep. I immediately realized how much God had been struggling to get my attention, and all the efforts God made in sending me a bible teacher and bringing me to the conference where I could come to experience his love.

Then about a year later I accepted God’s calling to live as a bible teacher for college students through the parable of the sower. Jesus words in Mark 4:19, “The worries of this life, the deceitfulness of wealth and the desires for other things come in and choke the word, making it unfruitful,” convicted me and showed me my condition. I could see clearly that unless I let go of my selfish desires and served God fully, I would never grow and bear fruit. It was at that point that I decided to become a full-time student in order to serve sheep with the word of God on my campus. I was fully aware that in becoming a full-time student I would have many academic struggles, but I was just happy to know God and serve God.

After receiving my Associates degree I was really happy and excited for the future. However not too long after came my biggest failure. After an old friend committed suicide, I compromised by hanging out with old friends, drinking, and smoking weed again. One compromise led to another, and before I knew it, I became addicted to hard drugs and began living a criminal lifestyle once again. As a result I lost desire for God’s word, left the church and forsook God’s calling. As my condition worsened, I lost my job, quit school, and got into huge debt. If it were not for my parents, I would’ve became a homeless person, living in the streets. As I kept losing self-control and was on the verge of going insane, I finally confessed my condition to my parents and through their suggestion I decided to come back to the church.

Once back in the church, I struggled to come to God personally and to serve him. But unexpectedly I began to experience bizarre symptoms such as panic attacks, sudden clouds of confusion, insomnia, and seeing demons in my sleep. Other times I felt like I was losing touch with reality and like I had lost all my emotions and could no longer feel anything. Several times I even thought that I was going mentally insane. These and many other symptoms would come and go as I struggled to draw near to God. By God’s grace as I struggled to come to God through 40 nights of prayer, all these symptoms suddenly disappeared and he granted me complete freedom from drugs and gave me a sound mind. Through the beginning of the dedication ceremony for our new church building, while all the songs were being sung, I began to weep as I felt God saying to me, “Now you are back where you belong. Remember that I love you.” Immediately I realized how much God had fought for me and I knew that it was true. God loves me a lot! Even when I did such foolish things and lived such a sinful life, he loved me and was willing to receive me and restore me.

As I picked up God’s mission again, I also enrolled back into school. At that time I found out that I still had to take a stats class in order to be eligible to transfer. Because of the difficulty I have always had with algebra, I knew this class was going to be very challenging for me. And it was. I failed the first two attempts, dropping my classes right before the drop due date. During that time I became very fatalistic, especially when my bible teacher asked me about my school matter. I began to doubt again whether it was really God’s will for me to go to university. Nevertheless on the third try, by God’s grace, and with the help of many tutors I passed with a C. It took me three semesters just to pass this one class. For me it was a real miracle. If it was not for God, his servants, and his mission I would have given up on my school matter a long time ago. I know my weakness and incapability very well, but only because of God I kept trying until God gave me the victory.

In university, academically my life was a lot easier. Most of my classes were related to my major, so I had a lot of fun. It was there that I overcame my fatalism in regard to school. I would no longer doubt or question whether going to school was God’s will. Instead the closer I got to the finish line, the more confident I became. However, the last two semesters were very time consuming and challenging. By that time I was married, I had two part time jobs, and I served about 7 to 8 bible studies per week. Despite my busy and hectic schedule I did my best to take care of all my responsibilities and duties. There were many times where I got discouraged and my spirit was crushed due to my huge workload, but by God’s help I was able to persevere and endure till the end. Today I am finally finished with school and I am very hopeful that God will provide me with a job in my field that will support my mission life.

As I look back at my life, I can see that I have failed many times – I have failed as a son, as a student, and even as God’s servant, but God has not left me in that defeated condition. Instead, God has helped me to conquer and overcome in all areas of life. Today I am very thankful to God for helping me reach this milestone in my life and am very excited to see God’s promises be fulfilled in the future. Only because of God I am where I am in life today, and I can say with certainly that God is faithful!

One word: I can do all things through Christ who strengthens me!

Getting Ready for the Lord's Battle
...After Joshua circumcised all the Israelites, Go...
Summer 2019 Conference Testimony
This conference allowed me to feel at peace and r...
UNLESS A KERNEL OF WHEAT FALLS AND DIES
John 12:20-30 Now there were some Greeks among...
Post Views: 71
Loading Likes...
Please Login to comment
8
1
0
9
newest oldest most voted
Amira

God’s love, patience, and faithfulness are beautiful and amazing! I pray your life will reveal God’s glory more and more! God bless you!

Such an encouraging and inspirational testimony. God’s love and grace is with you!

Praise God for His wonderful work in your life!

I really loved hearing your graduation testimony and was very moved to see God’s wonderful grace, power, and healing touch in your life! May God continue to use you preciously after graduation to help many lost sheep come back to Him and enter into His Kingdom!

“Now you are back where you belong. Remember that I love you.” very touching testimony of Gods unfailing love. He is indeed our good shepherd who searches for us and fights for us. God bless you all the more after graduation, using your life preciously for his salvation work

That was my favorite part for sure! It’s so heart-moving to see God’s unconditional love for us.