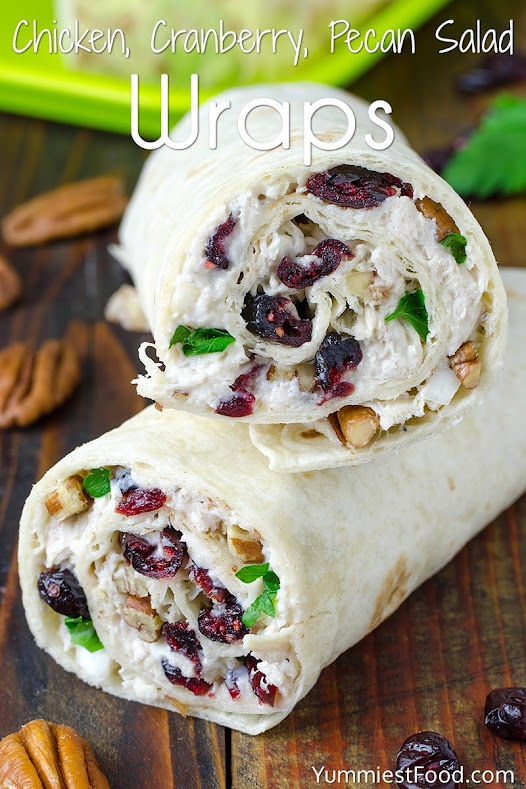 If you’re looking for a recipe that is quick and easy, this wrap is for you! I originally found the recipe here, but I tweaked it a little. So I’ll give you the original recipe first and then I’ll tell you what I did. That’s what I love about cooking – you can improvise and make it your own. But that’s a double-edged sword because I’ve ruined plenty of dishes by improvising a little too much. (Don’t ask about the kale quinoa minestrone soup I made a couple months ago 🤢)

These wraps are also perfect for shepherds! You can hold the wrap in one hand and munch down, while your other hand is free to drive to Bible study or scroll through your Bible study notes.

So you basically just throw all the ingredients together in a bowl, mix it up and slap it on a tortilla. Easy peasy!

I used boneless, skinless chicken breast and just boiled it til cooked through. Then I used some kitchen scissors to chop it up into small pieces. I didn’t have pecans, but I had some almonds on hand, so  I chopped up a handful of those. I’m sure you can substitute with almost any nut (walnuts, macadamia nuts, Brazil nuts, cashew). I chopped up the celery into pretty tiny pieces cause I didn’t want it to stand out too much, but I will say that it adds a nice crunch. 🙂

Now, I’m not really a fan of mayo, so I approached this recipe with hesitation, but I was pleasantly surprised when I first took a bite and found that the cranberries and the mayo have really nice complimentary flavors. And the cool thing about this recipe is that you can adjust the amount of mayo you use based on your taste preference. I skipped the white pepper, salt and parsley. The second time I made this I included the salt and pepper and didn’t notice any difference. 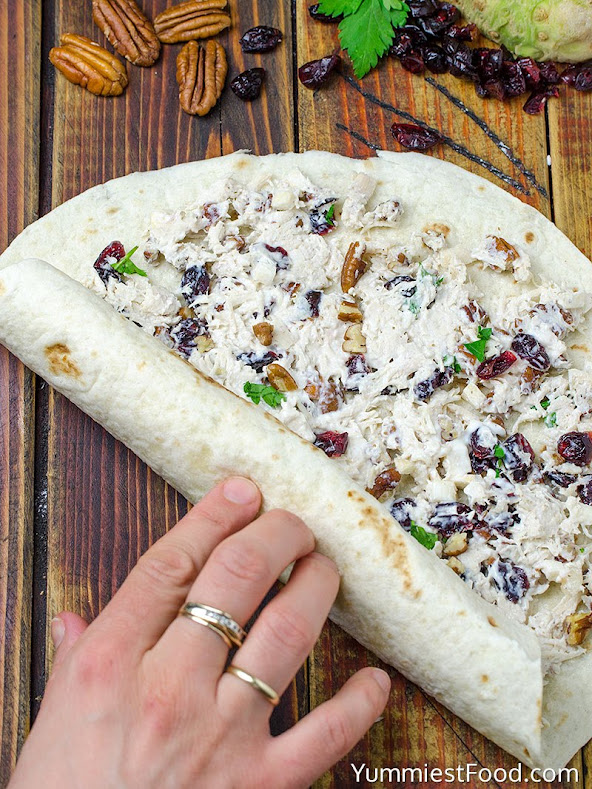 Now it’s time to wrap it up! (Hehe, pun not intended) The original recipe says to spread the mixture onto a tortilla in an even layer, then roll it up (kinda like when you roll up sushi). If you do it that way and then slice it into pieces it looks cool, but when I was making the wraps I forgot about the cool rolly way and just piled the stuff on the tortilla and wrapped it up like a burrito. Still turned out yummylicious!

I also added some cilantro and spinach to up the nutritional game. Side note: I used giant wrap/burrito tortillas but smaller flour tortillas would work fine too. I don’t suggest corn tortillas because of their flavor and size. Also, to make the tortilla more bendy and to prevent it from tearing, heat it up a little beforehand.

Later I ate it with some pretzel crisps and that was dee-lish. I bet it’ll be just as good in a lettuce wrap too. 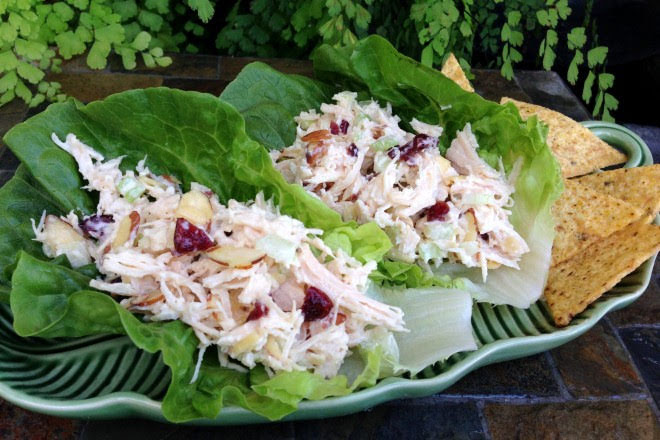 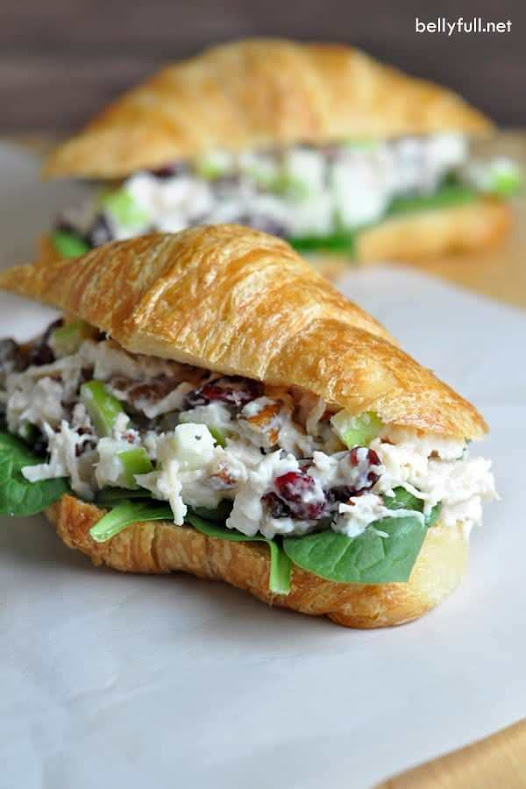 I hope this recipe will save you some time so that you can focus on feeding hungry sheep with the word of God! 🐑  📖

No-Bake Cheesecake
I saw this recipe recently online and decided to ...
Lazarus
Recently, I discovered this song as I was goin...
Knees Don't Buckle
Daniel 3 Part 2. When the three friends did not co...
Post Views: 1,085
Loading Likes...
Login
Please login to comment
23 Comments
oldest
newest most voted
Inline Feedbacks
View all comments
shepalexandra

What a delicious addition to our blog. I’m usually rushy, rushy and don’t have time to cook but this sounds like a very practical idea. Your suggestions such as “heat up the tortilla a bit before wrapping it” were very thoughtful. Maybe we can make this together one day like we made the fried eggplant! Haha, that would be cool. Thank you my shepherd for this!
Love,
Alexandra

Let’s do it! It’s also great cause you can make it in big batches and eat it throughout the week 🙂

It certainly has a festive look to it. I’ve been looking into recipes that don’t require me to warm anything up. And it looks hearty.

Not having to heat it up is a good point! Definitely a must for shepherds.

This recipe seems perfect for my need. Sometimes, I need to get some food, and eat while I drive to my mission field. But, even if I go to fast food restaurants, I still have to make a detour and wait for my order, which is something that I cannot always afford. But now, with this recipe, I can just make it at home, and take it with me, so I don’t have to stop anywhere to get food. Thanks for sharing this recipe and the tips

I can totally relate! Plus, with how unhealthy fast food tends to be I try to prepare meals at home as much as possible. This will save you time AND money

Wow thanks for posting! Good point I always eat with one hand on the way to campus to save time, while the other hand is on the wheel. It looks healthy and delicious.

Multi-tasking 🙂 Hope you enjoy it!

It looks great! Maybe we can have it at the church one day.

Good idea! Hmmm, maybe I can make it for Independence Day coming up..

Yeah! And this is a nice summer dish cause it’s cool and fresh

Oh Inez, I do miss your improvised dishes (well, not all of them… but most of them). (;

Hahaha..it’s an art I’m mastering along the way. Thanks for smiling and always saying “yum” 😀

Wow!!! Thank you for sharing!!! This looks pretty fail-proof–something I always look for in recipes. Although, I’m very curious about your kale minestrone soup haha!

Even the name sounds disgusting. Idk what I was thinking. But praise God that he is teaching me to cook in common life!

So you basically just throw all the ingredients together in a bowl, mix it up and slap it on a tortilla. Easy peasy! Now that sounds like my cooking skill :). And it looks pretty healthy. I might have to give this one a try.

And it really is that easy!

Wow! This looks really delicious! When is your turn to serve Friday dinner? lol…

Haha! Fourth of July is sooner

This is part of our dinner rotation this week!! Mm!!

Inez, it was delicious!! You were right, the cranberries do go well with the mayo. I don’t typically like cold meals like sandwiches/wraps, but this was very satisfying and tasty. Thank you for making these for us to try 😀

This looks good and not to hard to prepare. Thank you for posting!