King Nebuchadnezzar tried to appeal to them with mercy by giving them one more chance to bow down at the next musical cue… and threatened again to throw them in. He taunted them saying, “When you are thrown in, then what god will be able to rescue you from my hand?”

When I read that I saw he really is delusional and full of himself – rescue you from my hand???? He was a human with zero supernatural powers!!! How could you put yourself at a god level, even at a lower case g level? But then I considered my clients and how some of them have that same delusional thinking. I see that pride is a delusion and you lose sense of reality when you do not consider God. You just become really extreme and crazy down the road, so I must struggle to be humble and not hold onto any sense of pride.

Anyway, even at the mad King’s second chance and second threat, they replied, “O Nebuchadnezzar, we do not need to defend ourselves before you in this matter. If we are thrown into the blazing fire, the God we serve is able to save us from it and he will rescue us from your hand. But EVEN IF HE DOES NOT, we want you to know that we will NOT serve your gods or worship the image of gold you have set up.”

Wow…even when they had already proven their faith in God, they proved their loyalty to God even more. They believed that God had all the power to save them. But they also believed that God is the Sovereign Lord who does what he chooses to do. He does what HE decides is really best. They put their trust in God’s good choice as Sovereign God – and professed their loyalty to him even in a fiery death. Surely God must have been so touched, seeing these 3 men this way.

What I learned from them was how I tend to have my own expectations or become outcome-focused, instead of really standing on God’s side and whatever he chooses. I’m afraid of failure, I’m afraid of suffering, and I am afraid of pain. I want God to protect me from these things. When I hear about tragedies I pray that God would never ever let me go through that… But again I see that my focus and attitude are wrong. Because in being that way, it’s always about me and saving myself. But my focus should be to love God as God and remain loyal to him alone – no matter what he chooses. Otherwise, I am loyal to myself, my circumstance and my comfortable life.

But I know I cannot truly serve God this way… so I must repent and make my loyalty lie with God alone. Even if things do not go the way I expect. Even if life becomes harder and harder and harder. What I learn here is God is God who does what is right. So then whatever God chooses to do, I must choose to accept and standby.  It is clear that God is my owner. If a potter makes a cup and throws it on the ground, who can say he is wrong? It’s his cup! And if he wanted to do that, there is a good reason. So in that way I must really surrender my life to God and his choice….whatever my future holds…whether it’s a short life or long life. Suffering life, easy life. Poor life, rich life… the choice belongs to God and no matter what, I must not give into my desires or the easy way out. 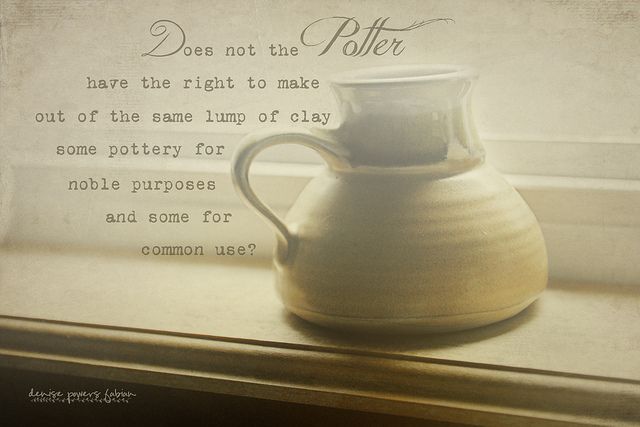 Whether my family approves of my life or not. Whether my campus wants me to stay or leave. Whether my job wants to fire me or not… I must not compromise and lose my integrity before God.

At this they were thrown into the fire. However, they were not burnt at all. They were not even alone. They didn’t feel an ounce of flame. They didn’t even smell like a candle. And  God’s angel was with them… could be an angel or Jesus himself! Either way, in this way God honored them so highly before the king, not only revealing his power, but showing how preciously he regarded his servants for their loyalty and their great honor to God even before the king. I see that God was really compelled by their response and their faith, that he wanted to show them just how pleased he was with them. He could have shown it by telling them in person after they died. That would have been really great too. But God decided he would save them and honor them highly so that fire couldn’t even touch them, and neither could angry kings.

This reminds me that God has the final say above all. I remember when my boss at the bookstore cash register did something sneaky behind my back to unjustly make my last day several months sooner than it was supposed to be. I didn’t know it at the time, but I found out he put the blame behind the director, saying it was his decision. I was really sad and defeated.

But when I went to the warehouse to put away the hangers, the manager from the warehouse department told me that if I ever needed a position when I returned to finish the rest of my bachelor’s degree, to let him know so that he could hire me back. He had no idea that I had just practically been laid off 2 minutes ago. At that moment I realized that bosses do not have the final say, but instead God is sovereign over all authorities decisions. I was so happy and thankful that I ran right to the boss who fired me and told him how I was just rehired by the warehouse manager and thankful that God provided for me  and takes care of my job matter – regardless of what the director chose. He looked at me so shocked and even kinda of guilty and reluctantly said, “…Wow…”

At that time I had even run away from God’s calling. But I recognized God’s grace and mercy towards me, that he would even use his sovereignty for my good, even though I was not doing so well…God truly is the Sovereign Lord. There is no algorithm to guarantee his mercy and his favor. However, He is sovereign to do as he chooses. To express grace as he chooses, judgment as he chooses, to give, to take away, anything as he chooses… God has been only good and merciful to me so far, being very kind to me to do things in my favor when I was not doing well and did not deserve them… Surely God is a good God. But even if he does not continue to do things in my favor, God remains a Good God. He is the Sovereign Lord I must live for and follow.

May I learn to surrender everything to God’s sovereignty and live for God’s glory alone, so that in times of loss and blessing, I can still keep my integrity for God and not live for myself.

One Word: God is Sovereign God who chooses what is right.

“So then whatever God chooses to do, I must choose to accept and standby.” Such a powerful sentence!! Also “even if He does not” – that phrase has really helped me to not be consumed with anxiety and fears, because no matter what happens, God is in control and I can put my life in His hands. This passage hits a lot differently now after a few years. Even if He does not rescue me from dangerous circumstances, it doesn’t make a difference – He is still God, whatever He chooses to do. This past week I felt like I was drowning in sinking sand due to my work situation, but remembering the sovereignty of God is like rock solid ground to rest on.

Also…”Even if He does not” sounds like a good name for a soccer team haha. I wonder if we ever used that? It sounds familiar. “Even if He does NOT!!!”

Amen, when we play soccer again we can use that name. 🙂 Also, yes it is so true that the Sovereignty of God is a solid rock to stand on. I have noticed that immensely in the past few weeks and even days when some things happened that I did not expect whatsoever. Before, I would have been so troubled and afraid in my spirit, but now I get over it fast and sing praises and hymns to my Faithful God. Thank Jesus for saving me!

This blog post couldn’t come at a more appropriate time for me. The emphasis on God being a good God is very important to me in all these kinds of matters. I notice that in the same way you were afraid of failure, suffering, and pain – I too have been afraid of all these. However, like you said, my attitude and focus are completely wrong when I am simply living my life to avoid the pain. Yes, I truly must focus on loving God with all my heart, mind, soul and strength and remain loyal to Him. The outcome? That’s up to God, not me. When I do my part, God sees it and will always remember it in his memory. I’m living for that day where I stand before God and He says to me, “Well done, good and faithful servant! You have been faithful with a few things; I will put you in charge of many things. Come and share your master’s happiness!” (Matthew 25:21). Until then, like Apostle Paul says in 2 Timothy – be good soldiers of Christ Jesus and fight the good fight of faith to the end! God bless you sister in Christ so immensely. ❤️❤️❤️✝️✝️✝️🙏🙏🙏

Amen! That faith in God and loyalty to him is really beautiful, inspiring and powerful!

“Bosses do not have the final say, but instead God is sovereign over all authorities decisions”

Very encouraged to entrust my present job, future career, and life into Gods hands. I can trust him because He is good and right in all he does.

Thank you very much sister. 🙏🏾

Amen. Thank you for such a powerful testimony of Gods Grace, love and sovereignty. Many say I trust in God but as soon as the storms come then instead of saying amennnnn, they are say aw-mannnn. I know I have done this many times and the end result was always worse then it had to be. But praise God for His mercy and patience. I was reminded of how God has been sovereign in my life even in times I did not expect it. Praise God for your struggle to see and accept a God’s sovereignty.

Hahahaha uh oh! Awwwwmannnn is not the right thing to say – I should be careful to say Amennnnn instead! Thank you for clarifying the difference xD

Tell me about it. I felt rebuked re reading this testimony after Sarah told me she wanted to post this draft that has been sitting here for the past almost 2 years !

Thanks for this reminder, even though it’s been 2+ years. Even if he does not… I must never forget this faith of steel in the 🔥🔥🔥 of job!!

I know that I am responding almost a month later, yet I do want to comment…God is sovereign over our lives and I think that’s an important lesson to remember, especially when his sovereign choice is not favorable to me…and that’s ok. I am most free when I just say “I am ok with God’s choice.”